Identity and Struggle at the Margins of the Nation-State: The Laboring Peoples of Central America and the Hispanic Caribbean, Aldo A. Lauria Santiago 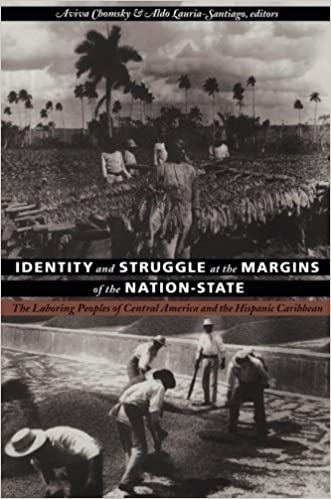 Identity and Struggle at the Margins of the Nation-State brings together new research on the social history of Central America and the Spanish-speaking Caribbean during the late nineteenth and early twentieth centuries. Aviva Chomsky and Aldo A. Lauria Santiago have gathered both well-known and emerging scholars to demonstrate how the actions and ideas of rural workers, peasants, migrants, and women formed an integral part of the growth of the export economies of the era and to examine the underacknowledged impact such groups had on the shaping of national histories.
Responding to the fact that the more common, elite-centered “national” histories distort or erase the importance of gender, race, ethnicity, popular consciousness, and identity, contributors to this volume correct this imbalance by moving these previously overlooked issues to the center of historical research and analysis. In so doing, they describe how these marginalized working peoples of the Hispanic Caribbean Basin managed to remain centered on not only class-based issues but on a sense of community, a desire for dignity, and a struggle for access to resources. Individual essays include discussions of plantation justice in Guatemala, highland Indians in Nicaragua, the effects of foreign corporations in Costa Rica, coffee production in El Salvador, banana workers in Honduras, sexuality and working-class feminism in Puerto Rico, the Cuban sugar industry, agrarian reform in the Dominican Republic, and finally, potential directions for future research and historiography on Central America and the Caribbean.

This collection will have a wide audience among Caribbeanists and Central Americanists, as well as students of gender studies, and labor, social, Latin American, and agrarian history.

“Identity and Struggle contributes to an important new body of scholarship reinterpreting the social history of Central America and the Caribbean from the bottom up. . . . One strength of these essays is their recognition of agency in the actions of those marginalized from power.” — Richard Stahler-Sholk , Labor History

“[I]nnovative, deeply researched case studies. . . . [T]his is a rich volume that brings the small countries of Central America and the Spanish Caribbean to center stage. . . . This book will be essential reading for graduate students and others who intend to work on the region; and it will appeal to anyone concerned with labor, race, nation, gender and the intersections of political, cultural and socioeconomic history.” — Catherine LeGrand , Hispanic American Historical Review

“This book contributes to a more balanced account of the building and consolidation of the Central American-Hispanic Caribbean nation-states by documenting less well known but influential sectors and issues that shaped their history.” — Margarita Bolaños and María Eugenia Bozzoli , Rural History

“This collection is important because its articles touch upon essential themes in modern Latin American history. Furthermore, the articles are both well-grounded in empirical research and theoretically and comparatively informed. This will be an important book for scholars for years to come. It certainly should be added to university reading lists.” — Michiel Baud , European Review of Latin American and Caribbean Studies

“This is an important volume in Latin American labour history, which makes a welcome disciplinary contribution with its emphasis on ethnicity within labour dynamics and class formation.” — British Bulletin of Publications

“This is an important volume. Its innovative essays focus on the diverse participation by working peoples in the modern histories of the nations of Central America and the Spanish-speaking Caribbean.” — John Tutino , American Historical Review

“This volume samples some of the best recent work in the Anglophone social history of ‘laboring people’ in modern (1850-1950) Central America and the Hispanic Caribbean. . . . [It] makes a strong, welcome contribution to the social history of the subaltern populations of the nations of the region, and should be on the syllabus of any graduate seminar in Latin American or International labor history.” — Mark Thurner , Journal of World History

“Unlike many traditional histories, the essays in this volume, which pull from recent trends in social and cultural history, explore the national histories from a paradigm that embraces the broadly defined popular classes as major actors. . . . This volume brings together emerging and well-known scholars to look at issues such as plantation justice in Guatemala, examining the United Fruit Company and the Tiquisate massacre; Nicaragua’s highland Indian population; the impact of foreign corporations in Costa Rica; coffee production in El Salvador; banana workers in Honduras; working-class feminism and sexuality in Puerto Rico; Cuba’s sugar industry; agrarian reform in the Dominican Republic; and possible paths for future research and historiography on Central America and the Caribbean.” — , Human Resources Abstracts

"[An] exciting collection of essays. . . . [O]pens up new territory for labor historians to find treasure, not through wrecking the older paradigms but putting them to new uses. . . . [A]ll the contributions show the marks of first-rate research . . ." — Julio Cèsar Pino , Journal of Third World Studies

“This collection gives us a much more nuanced view of labor in these regions than previously available. Using archives and oral history, the writers successfully break through the screen of elite-centered history into the world of the masses.” — David McCreery, Georgia State University

“This volume does an exceptional job of bringing together in a single volume very substantial new research on working people and their history in the Hispanic Caribbean Basin.” — Ralph Lee Woodward Jr., Tulane University