The Black Latinx Americas xLab is a research hub that organizes and inspires new research activity in Black Latinx and Black Latin American studies. The “x” represents the intersections of race, gender, sexuality with the digital, public, and interdisciplinary. The lab functions as an incubator for new ideas, methods, and praxis. We invite scholars, both graduate students and faculty, from the humanities and other disciplines in developing interdisciplinary, vertically integrated research projects. The lab seeks to foster both formal collaboration and informal exchange, as well as the sharing of technological resources that enable lab participants to experiment with new research methods, new lines of inquiry, and new ways of engaging audiences at Rutgers and beyond.

Voces of a Pandemic

The Henry Rutgers Term Chair in Latino Studies, Professor Lilia Fernández at Rutgers University, in partnership with Voces Oral History Center, The University of Texas at Austin, share these very special interviews. The Latino community has been disproportionately affected by the novel Coronavirus, for several reasons. Many Latinas/os work in “essential” jobs that involve contact which may lead to infection. Others are affected because of a lack of quality health care. And more have underlying health problems. As this crisis unfolds, the Voces Oral History Center seeks to record, archive and disseminate interviews about the pandemic’s effect on the larger Latina/o community. This oral history project and public event seeks to examine the individual life of each person interviewed, looking for insights into the effects of the public health crisis.

Read more: Voces of a Pandemic

An Inventory of Hispanic-Related Texts at the American Antiquarian Society

The bibliographic data presented in this web site is the result of a survey and inventory of Hispanic authored and related texts held by the American Antiquarian Society in Worcester, Massachusetts. The American Antiquarian Society (AAS) is among the most important repositories of pre-1870s imprints and documents in the United States and had not yet been surveyed for the purposes of the “Recovering the US Hispanic Literary Heritage project.” Its importance as a repository for historical materials cannot be overstated. According to the AAS’s own description:

"With holdings numbering close to three million books, pamphlets, broadsides, manuscripts, prints, maps, and newspapers, this library preserves the largest single collection of printed source material relating to the history, literature, and culture of the first 250 years of what is now the United States. It specializes in the American period to 1877, and holds two-thirds of the total pieces known to have been printed in this country between 1640 and 1821, as well as the most useful source materials and reference works printed since that period. Its files of eighteenth- and nineteenth-century American newspapers, numbering two million issues, are the finest anywhere."

Read more: An Inventory of Hispanic-Related Texts at the American Antiquarian Society 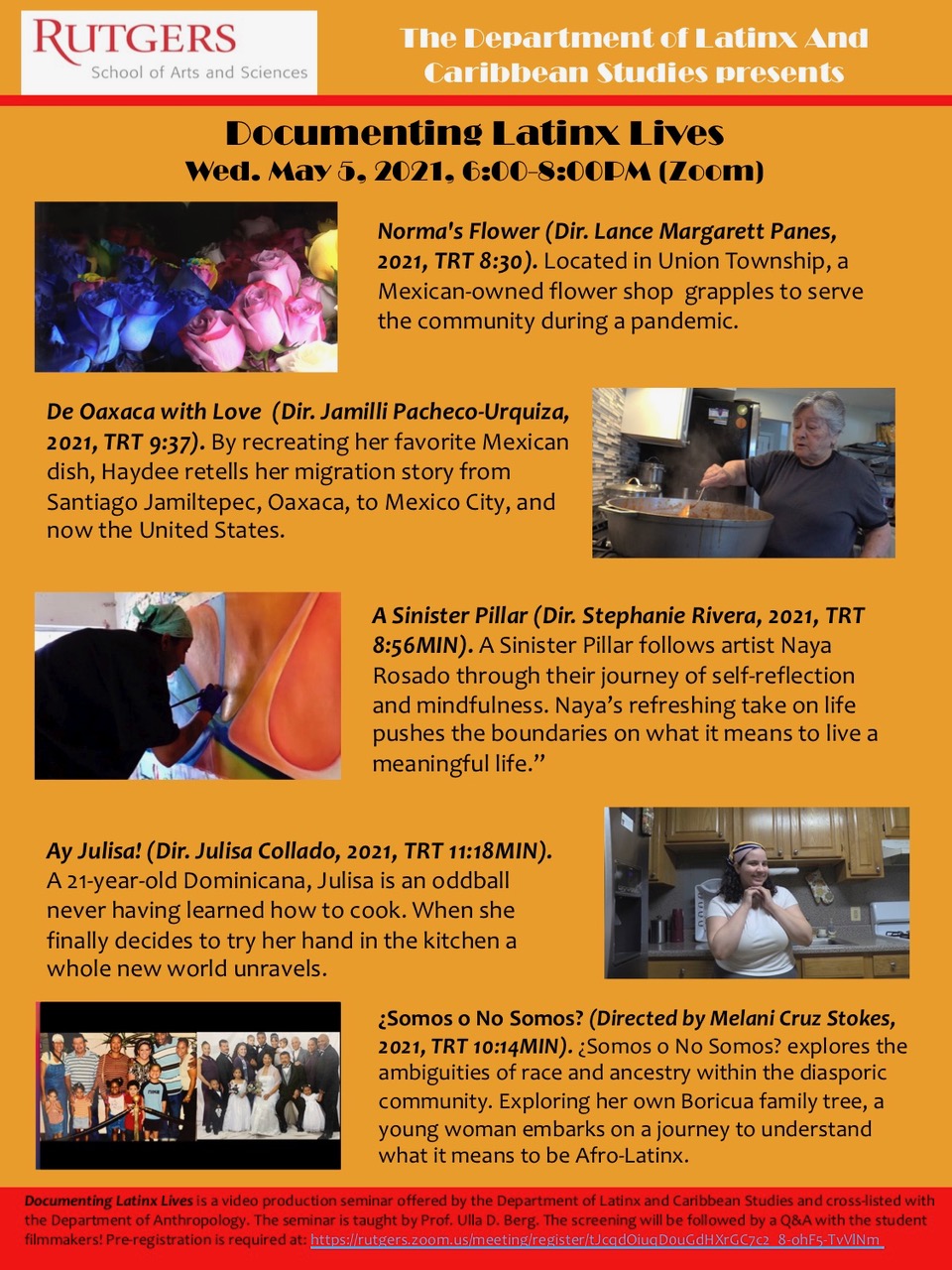 This year the course (seminar + lab) was taught remotely. Students made short films centering around stories about specific characters: a grand mother remembering her life in Oaxaca while cooking costilla de puerco en mole rojo; a flowershop owner in Union City navigating the pandemic; a young visual artist from Elizabeth talking candid about life and societal expectations, a Dominican daughter who never had learned how to cook, and a young women pondering what it means for her family to embody both Afrolatinx and Boricua identities. 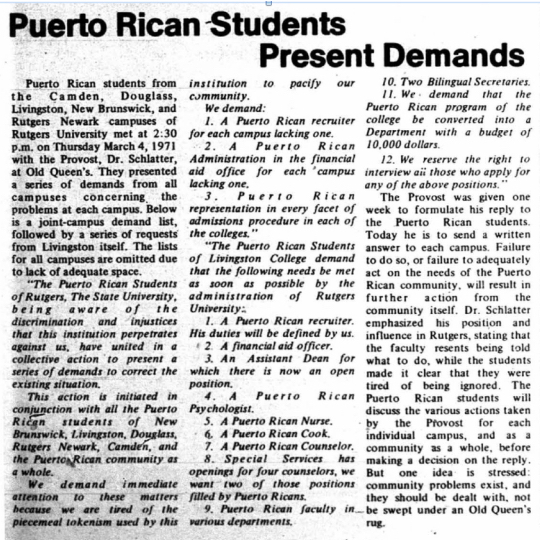 In January of 2016, the Rutgers community was informed about the approval of the name change of the Department of Latino and Hispanic Caribbean Studies into Department of Latino and Caribbean Studies. This recent change of name is part of a gradual evolution of the faculty and curriculum of the department, which was originally dedicated to the study of Puerto Ricans in the U.S. The Department wants to celebrate its present and future by studying its origins and history. Our team of undergraduate students and faculty investigators will help us research and curate the historical archive of our department and to conduct research about LatinX and Caribbean students at Rutgers, New Brunswick and/or or New Jersey.

Latinos make up nearly twenty percent of the Garden State’s population. Professor Lilia Fernandez and Rutgers students have spent several summers exploring and documenting this population’s history through the Latino New Jersey History Project, a student-led, community-based research project. Launched by Professor Fernandez in 2016, the project aims to document the histories of New Jersey’s diverse Latino/a communities by identifying archival materials and conducting oral histories with local residents. Since summer 2017, Rutgers undergraduate and graduate students have been receiving training, doing preliminary research, and conducting oral histories with community members in Central and Northern New Jersey. They have gathered census data, created maps, and produced the following Story Maps and short videos below. These tell the stories of individuals who migrated from Latin America or trace the growth of entire ethnic groups in the Garden State. Others reveal how certain towns have changed demographically over the past four decades and how Latinos/as have contributed to the state’s rich heritage.